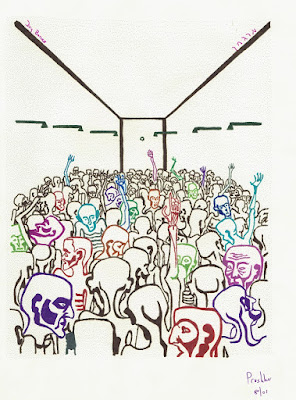 
They were determined to destroy us - all of us, the entire Jewish people - to eradicate us so completely from the planet that not only were there none of us left, but even the memory that we had ever existed would be expunged. It was truly the most extraordinary undertaking, like that Chinese emperor who swore to annihilate the whole of human history, and built the pyre on which the rite would be performed; only he paused for just that one moment too many, and the realisation that would defeat him entered in - that he could indeed throw everything upon the fire, but the fire itself would still exist, and the universal infamy of the fire as well; preserving precisely that which the rite of fire had been intended to destroy.


Yet how admirable, how remarkable an idea it was! To build a universal empire of Jewish genocide - the realisation of a Christian dream as old as Augustine and the apostle Paul! A total evaporation, not just of people, but of culture, language, history, tradition! Yet could they not see that it was impossible; that we were made from dust, and numbered as many as the specks of dust; what use then to return us to dust? Could they not see that survival of some sort was positively inexorable?
They pulled out our gold teeth - its value as currency survived.
They shaved our heads - a wig and a bald scalp survived.
They broke our bones - the cracking of the knuckle reverberated through the pages of history.
They burned our corpses - the smell of incense soothed the nostrils of God.
They denied this Holocaust had taken place – the act of denial provided for its confirmation.
How, they asked, can we resolve finally the problem of the Jews - the question survived.
So they began to murder us, one by one - but there were always more Jews: those of other lands that had not yet been conquered; those who lived as marrano Jews in deepest secrecy; those who had pretended to convert away from Judaism; those who had not yet been born; the Khazars and Falashas; those hundreds of years hence who would discover by chance some fragment of parchment, some archaeological remainder, and spread abroad the rumour of a murdered people.
So they burned our shuls, tore up our Torah scrolls, banned and burned our literature, re-wrote our history, changed our names to numbers, disallowed our language, closed our shops, impregnated our daughters, forged defamatory documents, counterfeited blasphemies, faked apostasies, compelled us to break our own most sacred laws, harnessed the whole gamut of art and science in their great endeavour, created an entire industry of propaganda, a complete infrastructure of mass-murder: factories of killing, dockyards of killing, railway-lines of killing - but the very act of obliteration survived.
No, they could not destroy us.
For how could they have gone further?
Kill every Jew on the planet? Christians would still remember that Jesus was a Jew; and the Holy Scriptures would survive.
Kill every Christian too? How, without committing mass suicide?
And what of the Moslems who share a common heritage?
Kill every Moslem too?
And Druze, and Bahai, and Gnostic...
Wipe out all religion then, just to be safe... religion’s contribution to human history will survive.
Eradicate history then, as that Chinese emperor sought in vain to do - the ashes of the pyre will survive.
And even if you built the biggest bomb and blew planet Earth out of the heavens, would not God - our God, a Jewish God - survive?
And if not God, then some few stars, just a handful of yellow stars, like the ones they made us wear on our uniforms to denote that we were Jews; just a handful, even of distant, yellow stars, as numberless as Abraham’s descendants, flickering indestructibly in the advancing black hole of the sky...


All rights reserved
The Argaman Press
Posted by David Prashker at 4:33 AM

Email ThisBlogThis!Share to TwitterShare to FacebookShare to Pinterest
Labels: The Hourglass