Elegy On The Death Of Moses 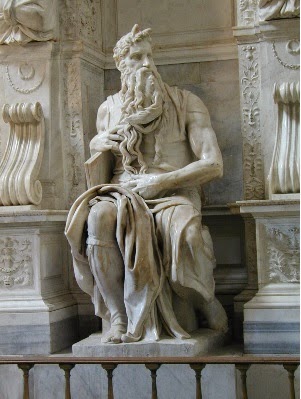 Alone in this bleak desert, under a cold moon,
on the dry hill-slopes with the mosquitoes preying,
and the fire cracking its knuckles brighter than any
revelation - the laws of time carved on a face of
stone whose lips now barely stammered their last song,
and eyelids stuttered wearily in closing upon sleep.

No time now. Desert had consumed his vision,
sunk it in quicksand, blinded him with mirages.
Too long following the cloud of smoke had left
his legs directionless. Authority had stooped his
back and no commandment had ordained for him a
litter. On the barren rock-face of his life’s pyramid,
no mark, no covenant, only the sand-scratched,
abstract image and the shadow of an unseen likeness,
uniting all divinity in a time-bound rib of dust.

So he sat, on the curved tooth of the hill, waiting.
The tongues of fire had licked his vision clean,
manna had failed to satisfy his hunger, age had paled
his bones, and now his stick upon the rock could
bring forth only silence. Though he had dreamed
of milk and honey, spoken the unspeakable, roamed
more high and widely even than the Bedou, though he
had found the path and paved it, measured out the
weights and balances, numbered every head, though he
had tripped and stumbled bravely to the very summit
of the mountain - here, now, was the end of time.
For Pisgah, it seems, is about as far
as a man may reasonably hope to travel.

It could have been the end of all time - now and
ever. Forty years had slipped through his fingers,
like grains of sand, like a woman’s fingers.
Embers now the burning bush, skinless the serpent
from the rod, parched the desert’s mouth, dried up
the rock’s drawn water, gone the sea’s parting.
Apparently there had been some sin, some crime,
once - it was so hard to remember - an act in
anger, or defiance, some such, a brass serpent or
a golden bull-calf, one of the six hundred and
thirteen commandments no doubt - who could possibly
remember let alone obey so many harsh and complicated
edicts? - some ritual impurity perhaps, touching the
unwritten laws, impinging on His jealousy; some sin,
some crime, but truly he could not remember.

Only how he had waved farewell, confident in his
successor, wishing he could part the waters
of the Jordan as a last gift to his people
who could not know about the waiting war,
the broken promise.

Yet he knew.
In the sands’ riddle he had prophesied disillusion.
In the stars’ arcana he had predicted the judgements
of posterity. Men dream the last oasis. Yet so many
years of wilderness had taught him to expect mirages.
So he listened, and heard - only the desert’s voice,
sighing in the wind like crickets. So he looked,
and saw - only the landscape of his life,
flatter than any desert.

And unable to remember what sin, what crime,
he wondered why he had been left behind, abandoned
on this hillside overlooking Jordan. Was it simply
that he had done his work, simply that he had
grown too old, simply to spare him from the bleaker
desert that persisted beyond stream and mountain?

Alone in this bleak desert, under a cold moon,
on the dry hill-slopes with the mosquitoes preying -
a passing stranger might have noticed an old sad
man, scratching with his fingers in the dust,
listening to the desert hush and the crack
of embers, seeing in the fading fire
the miracle of his own death.


"Elegy On The Death Of Moses" is published in "Welcome To My World, Selected Poems 1973-2013", The Argaman Press. Click here to purchase the book.