The Song of Sisyphus 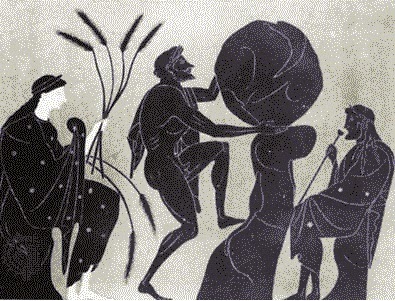 
For those unfamiliar with the myth, Sisyphus was punished for cursing the gods; his sentence, to push a large boulder to the summit of a tall mountain, from where the gods would then project it back to the bottom, and he required to clamber down and push it up again. A perfect analogy for the “absurdity” of the human condition, according to the French philosopher Albert Camus. My version amends the Greek original to my own philosophical position, one which refuses to collaborate in its own victimhood. I am also conscious that the crucial word-play on the word “dam” is likely to be untranslatable.

In these days of my dying I have come back to the
mountain, a man bred on sluggish rivers,
taught to unwind whatever stream and pour it gently,
gratefully, slipping over rocks,
taught to lie down on soft, dry beds, to tend the
trees and flowers, to know my limits and to keep
within my boundaries,
taught to look upwards to the peaks and shield my
eyes against the blinding light of suns, of gods,
of madmen, who alone could travel there,
taught to look upwards and admire, even while my back
bent downwards to the long, flat sea,
taught to obey the flowing of the current, to brace
myself against the cold, to spin only where the
whirlpool turned me, to cease when I faced the
overpowering
dam.

And when I reached the sea, I found a ragged shell,
and opened it, I probed its ache of darkness,
tampering, discarding, modifying, uncovering
its broken body piece by piece,
and keeping, or not keeping.
I took the half-made shell and plunged it deep into
the acid of its dissolution, and reformed it,
moulding its darkness with my own bare hands,
until it was complete.

And then I held it to the skies, my head turned
upwards to the mountain-tops, the tiny god I had
created gleaming in my hands, my own pride gleaming,

Oh, it was ambitious, it was brazen, but I was always
ambitious, I who found the river far too sluggish, I
who knew that nothing could be safe or simple that a
man made in defiance of his gods.

There are mysteries, moments of pure magic, there are
revelations, visions in a dream of dissipated light,
there are heights beyond the mountain-tops,
and these too I have found, and held,
and formed with my own hands, yet never once
did my feet lift off the earth, never once
did I fail to soar beyond the clouds.

Thus did I live, and now, in these days of my dying,
I have come back to the mountain, a man bred on
sluggish rivers, a man prepared to lift the rock and
hoist it upwards to the peaks, to stand there, my
head tilted skywards, my eyes unshielded,
my voice raised to the gods,

as I curse them
as I defy them,
as I lift the rock upon my shoulders, and hurl it,
as I once hurled an idol I had made
into the paltry river,
into the weak and flimsy,
quickly-broken
dam.

"The Song of Sisyphus" is published in "Welcome To My World, Selected Poems 1973-2013", The Argaman Press. Click here to purchase the book.


The illustration on this page shows "The Punishment of Sisyphus", a detail of a painting on an amphora by the Achelous Painter, late 6th century BC; in the State Collections of Classical Art Munich Bildarchiv Foto Marburg/Art Resource, New York City.

Posted by David Prashker at 6:03 AM