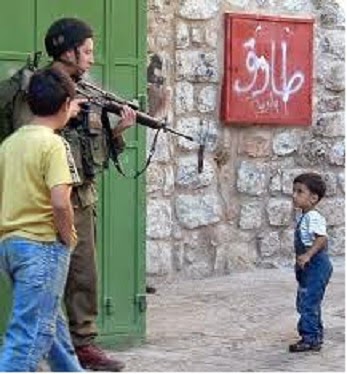 In the summer of 1983, the summer after the War of Peace for Galilee in which the PLO was expelled from Lebanon and the massacre of Palestinian refugees took place in the Beirut camps of Sabra and Shatila, I was teaching in a kibbutz high school in northern Israel and paid a visit to an equivalent Palestinian school on the West Bank. Our courses in Math and Science were hardly any different from theirs. General Geography was identical, but local geography required local maps, and it was fascinating to see how much propaganda could be put into a map, on both sides of the ideological border. History was more obviously propaganda, while Language prioritised English in both camps, but switched the priority of Arabic and Hebrew. At one stage they took me to see their primary and nursery schools, and it was the assembly in the latter that finally drove me into poetry: the flag-waving and the anthem-singing and the expressions of disdain. Those malleable minds were not yet five years old, and already destined by training to be another generation of hatred - just like the nursery school kids back in Nahariya. Had circumstances been different, I could have written the same poem in Soweto or Johannesburg in 1978, and could write it today in Isfahan, in Lyon, in Tripoli, in Baltimore, in Liverpool, in Melbourne, almost anywhere in Africa or across the Middle East, including, sadly, still, in Palestine and Israel.

On the wall a geography of bones
teaches of mother earth and father land,
its body prostrate, supine, an effigy
of some dead patriarch or ancient hero
mummified in time, embalmed in history,
preserved relic of our shared identity.

The tongue is silent that once spoke the roots
of words we speak; the fleshless corpse is naked
that once dressed as we still dress,
and dreamed, and grew embittered
with the self-same disappointments. This body
(its wrist-tag bearing the wrong name)
a rib-cage of grids and contours;
eyes of lakes; breasts of hills;
limbs and members severed by the surgery of war;
the deep declension of the pelvis meaning valley;
the splayed fingers surrendering a tattered flag,
the mute lips on which an anthem died,
and there (say nothing, pretend not to have seen,
leave unexplained, except rhetorically,
in metaphor) the love bite, the mons pubis,
the future generations lying impotent between.

In the barren fields beyond the school -
land being once again reclaimed, reconquered -
the cactuses are flowering,
whole tracts of desert bloom and blossom
under the falling manna of a night’s dull rain.
Dry grass turns green as mould,
swamp and river deepen into drowning pools:
life and death eternally recycled,
the one into the other, and then back again.

Here, we look at earth and see its history,
growing from the soil upwards and outwards:
bone of tree, flesh of flower,
(human degeneration, whether into corpse or killer)
the great necropoloi, the tombstone cities we bedeck
with flowers and inscriptions of ancestor-worship;
and the new cities, rising out of bog or ruin,
plaster white as calcified bones,
clay brown as coagulated blood or poisoned liver,
growing death out of a corpse of land,
grafting history upon history, layer by layer
like living archaeological remains -
but the nursery children are clamouring for games.

In school they teach us how to love selectively,
not for who we are,
but for which side we are on,
not for good unless “our” good,
nor evil unless “their” evil,
not for human,
but for race, class, nation, colour, gender,
learning love by learning who to hate.

Thus the map of our common greed and selfishness,
our flag, our anthem, our tribe, our party,
our collective alibi for xenophobia,
our shared impunity in justifying cruelty,
our connubial blanket of barbed wire,
our walls, our guards, our laws, our customs -
walls that keep us in and keep you out.

There are, of course, atrocities on both sides,
breaches of the civilised codes of killing,
the humanitarian norms of genocide in war,
the same rhetoric used to praise or to condemn.
There are, on both sides, broken bones, exploding
bullets - but this, this is the worst atrocity:
children re-assembling matchstick flags,
designing egg-box parliaments,
learning by heart the nobility of the cause,
reciting by rote the names of kings and martyrs,
creating their Blue Peter liturgies of heroines
and heroes, singing the anthem, saluting the flag,
in all their four-year innocence.

This, this is the worst atrocity,
this process of indoctrination,
this teaching of conflict, antagonism, hate,
this idealism of the moderate middle-classes,
this preaching of the moral libertarians,
this all-justifying dream of peace, equality,
harmony, democracy – teachers, nurses, parents
massaging the unset foetal jelly
of cerebral muscle, softening it up,
loosening its sphincters, each thumbpress
bearing down upon the nerve of inhumanity,
not to heal, nor soothe, as masseuses do,
but stretching the brain upon the rack of ideology
until it is remoulded in the image of its own
destruction, and growing to maturity it bears
forever
the scar-tissue of imparted love-through-hate
that dribbles from its lips like mother’s milk
all in the name of truth and right and good.

This, this is the worst atrocity.
Barren fields will grow again, and die, and be reborn.
Corpses will rot till flowers bloom in them.
Desert will turn to bog and bog to desert.
Eternity will tussle in the arms of death
and give birth to eternity.
All that is nothing - merely nothing.
But this, this is the terrible something,
far worse than broken bones, or ropes, or bombs,
this disfiguring of a child’s heart and mind,
this breaking of a child’s humanity,
this, this process of indoctrination,
this is the ultimate atrocity,
perpetrated by each side
against itself.

"Nursery School" is published in "Welcome To My World, Selected Poems 1973-2013", The Argaman Press. Click here to purchase the book.

Posted by David Prashker at 7:20 PM