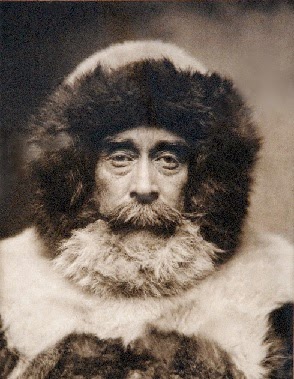 The form is known as a "dramatic monologue". No one ever did it better than Robert Browning, though Max Sebald made several wonderful attempts. The problem with a dramatic monologue, when you read it anyway, is that you have to get the accent right. I'm a Brit, Peary was an American - what more can I say! I also realise that "realised" in line 7 should have been spelled "realized", and I guess that "parlours" should have gone without its "u".

The name’s Peary, Robert Edwin Peary,
and no you haven’t heard of me,
despite the fact you should have done,
because I, not Cook, not Amundsen, not Scott,
I was the first to reach the geographical North Pole,
which used to be the last frontier of human exploration,
till scientists realised there are more than three dimensions,
such as inwards to the nucleus of the atom,
and outwards to the ice below the crust of Mars,
and upwards to the mount of knowledge,
yes and downwards too,
into the darkest depths of human calumny.
I hope they’ve got the guts they’ll need to find those poles.

Not that you need to know,
but I was born in Cresson,
which lies 40o 58' north and 78o 58' west,
80 miles from Pittsburgh, Pennsylvania,
in 1856, but moved to Maine,
the toughest journey of my life,
where I attended Bowdoin College
(the natives pronounce it Beau-din),
where Henry Wadsworth Longfellow was a student.
I graduated as a member of Delta Kappa Epsilon fraternity –
which means, I understand, a gentleman, in Inuit -
and was commissioned as a Civil Engineer Corps Officer
in the United States Navy in October, 1881.
I married the very lovely Josephine Diebitsch Peary,
and had two children with her: Marie and Robert Junior.
I should also tell you, since I’m always honest,
that Matthew Henson and I
both fathered children on Inuit women,
mine was called Ally,
while we were on our Arctic expeditions.

We made them all together, Matt and I,
explored Greenland by dog sled in 1886 and 1891;
returned to the island three times in the 1890s;
twice attempted to cross northwest Greenland over the ice cap;
discovered Navy Cliff.
How did we do it and survive?
By studying Inuit survival techniques, that’s how,
by building igloos,
dressing in furs in the native fashion,
both for heat preservation
and to get rid of the extra weight of tents and sleeping bags
when on the march.
Used Inuit hunters and dog-drivers too,
invented my Peary system
of having support teams and supply caches for Arctic travel.
Josephine came too sometimes.
Lost eight of my ten toes from frost bite.

Now people are envious sons of bitches
who never leave their front parlours
unless someone’s sent a chauffeured limousine,
and like to deny you your achievements
cause they can’t stand the thought that someone
struggled to achieve something worth the trouble
while they were fiddling their tax returns
and wondering who won the baseball,
so all I’ll say about the Jesup Land controversy
is that we found it,
and we saw Axel Heiberg too,
long before that Norwegian Sverdrup’s expedition,
and the men as give me the gold medals
from the American Geographical Society
and the Royal Geographical Society of London
stated that they honored my tenacity,
and they were damned right,
because it took tenacity to get to Jesup,
and they haven’t yet invented a word for what it took
to get the farthest north there is to get,
which was north of Ellesmere Island.

Now I gotta take a moment to say thanks to George Crocker,
who put up $50,000 to acquire the Roosevelt,
and cut a way through all that ice
between Greenland and Ellesmere Island,
and attain a Farthest North world record at 87° 06';
though the deniers deny me that achievement too,
from the comfort of their stone igloos
in the frozen tundra of Yale and Washington and Harvard,
where the only degrees they know are Law degrees,
certainly not ones of longitude nor latitude
(they give no latitude at all, these academic pedants),
- so many childless bachelorhoods at the Smithsonian.

We got back to the Roosevelt in May,
then weeks of agonizing travel,
west along the shore of Ellesmere
where we found Cape Colgate
and sighted a previously undiscovered farther-north,
named it “Crocker Land”.
People say I made the place up,
but folks at the National Geographic Society
don’t give you the Hubbard Gold Medal
for something they reckon you made up.

But I came here to tell you about the north pole,
because I found it first, whatever others say.
Me and 23 men set off from New York City on the Roosevelt
under the command of Captain Robert Bartlett, July 6, 1908.
Wintered near Cape Sheridan on Ellesmere Island,
then set out for the pole on February 28, 1909.
Sent the last support party back from “Bartlett Camp”
on April 1, latitude 87° 45' north.
That left just six of us,
Matt Henson and me and four Inuit,
Ootah, Egigingwah, Seegloo and Ooqueah.
Set up “Camp Jesup” in honour of my greatest sponsor,
on April 6 it was, not five miles from the pole.
Hit the point on April 7.
90o dead.
We nearly were too, from hunger, and exhaustion.

Now, all these years later,
it’s as much as I can do to make an expedition
to the liquor store on Eagle Island
and pick up a newspaper
to read all my detractors saying
I never done this and I never done that,
and Congress wanting to send an expedition to prove it,
like as if the footprints haven’t blown away.
Or if not me then Freddie Cook,
who was my surgeon on the 1891 expedition,
and if he says he made it to the Pole,
then I trust his instruments
more than I trust those jealous stay-at-homes
at the Smithsonian,
and I couldn’t care a monument in Greenland
whether he discovered it and I attained it,
or the other way around,
or both, or neither,
and whether you can prove it or you can’t,
cause the whole point ain’t the North Pole anyway,
that’s just a round number you stake out in eternity
like an igloo in the ice or a triangle in spherical trigonometry.

No point telling that to Congressmen and academics though.
They’d say there isn’t a north pole,
if they thought it would win them votes or research fellowships.

"Ninety Degrees North" is published in "Welcome To My World, Selected Poems 1973-2013", The Argaman Press. Click here to purchase the book.