At the corner of the slip-road where it leaves I-95
Beneath the bridge where would-be suicides come out alive
On the tradesmen’s side of Eden where the gods discard their trash
And the hustlers and the hookers and the junkies demand cash
Where the barbed-wire fence prevents you climbing into Paradise
And the manners of the residents could use some good advice
There’s a home for old panhandlers, board and lodging free
Down and out in downtown NYC

There’s an old man selling flowers, deep inside the traffic jam
He’s a veteran of something and it wasn’t Vietnam
Some war of school and home he lost, some war of weed and whiskey
Some battle with the government where the odds were clearly risky
The only rap he’s ever known was penitentiary
He can’t even get benefits so he’s here for charity
And he’s begging for a dime or maybe three
Down and out in downtown NYC

There’s a girl who’ll count your charm beads or read from the Tarot
She’s married to the man who sold out Desolation Row
She’s a heroine of darkness with a set of silver spoons
If you want the scars to heal, she says, you first must have the wounds
She’ll let you spend the night with her, but only if you pay
And she doesn’t accept money, gifts or amorous display
She’s come here to escape love’s tyranny
Her only guarantee is that there is no guarantee
Down and out in downtown NYC

There’s a defrocked politician seeking vengeance on the whore
Who threw him to the rat-pack back in 2004
He was looking for a contract, ten thousand dollars down
When he got handbagged on Canal Street by a pimp from Chinatown
They buried him in all his finery
With his Chinese Rolex watch and jewellery
Down and out in downtown NYC

Now we’re trying to get to Heaven but the GPS is miffed
It says make a legal U-turn at the bottom of the cliff
Then left at the Inferno and climb up the abyss
Leave your guilt behind you, regrets will not be missed
And keep on driving sunwards till you make it to the light
Just beyond the tunnel, destination’s on the right
But the light is simply angels on a neon Christmas tree
They shine from Lower East Side to the Upper Bowery
From the heights of Freedom Tower down to Little Italy
And we’re still hoping to win the lottery
Down and out in downtown NYC

Yes we all want the Big Apple, but we’ve chewed it to the core
And rumour has it Walmart wants to open up a store
They’re gonna bring this place prosperity
Down and out in downtown NYC 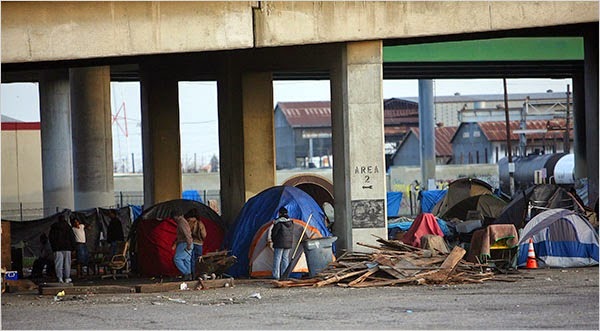 Posted by David Prashker at 8:52 AM