The Army Of The Poor

To listen to The Army Of The Poor, click here 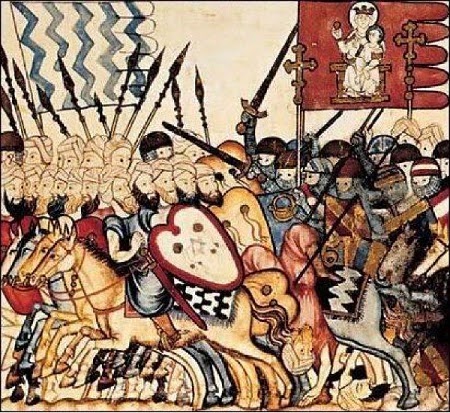 In days of deepest darkness,
of famine and of drought
A hundred thousand saviours
began to walk about
They went preaching on the mountains,
they went knocking on the doors
Gathering disciples for the army of the poor

Their song of course was freedom,
their banner one of hope
Their souls were bound together by a mile of fraying rope
Their uniforms were rags found in Salvation Army stores
Now onwards to Jerusalem, the army of the poor

A hundred thousand deaf and dumb found that they could talk
A hundred thousand cripples took up their beds and walked
A king, two popes, three cardinals, and fifty seven whores
All joined the holy cavalcade, the army of the poor

Well blind men followed blindly, and others in despair
And some of course for money, and some in wheelchairs
Even deaf men followed after, for all could hear the roar
And the weeping, and the wailing, of the army of the poor

There was one among this number who claimed he knew the truth
And he preached it so insistently, on every rock and roof
He nailed it to the windows, he stamped it on the floor
A thousand more surrendered to the army of the poor

"Come follow me, come follow me, form into a pack
Blind men nearest to the front and lepers at the back
If you're black or gay or Jewish, or simply insecure
Come weave the royal banner in the army of the poor"

So they headed for Jerusalem, left Europe at their backs
A half a million sinners were left dead upon the tracks
Plus several million others, it was hard to tell for sure
But anyway they wouldn't join the army of the poor

On they journeyed, eastwards, charting by the sun
Looking out for mirages, rejoicing at each one
Till awakened by illusion on some far and distant shore
Now dead men weave the banners in the army of the poor

Stay quiet in your beds tonight, the darkness you may trust
The men who came to save your souls have vanished into dust
Sleep peaceful in your bed tonight, feel grateful and secure
Thank God the world has now been saved, from the army of the poor

Words and music by David Prashker

Posted by David Prashker at 9:23 AM